Disclosure: As an Amazon Associate I earn from qualifying purchases. This post contains affiliate links. We’ll receive a small commission if you purchase any product using our links with no extra cost on your side. Please note that we only suggest high-quality products that have been tested and considered useful by experts. Learn more!

It’s so difficult for me to find a person who doesn’t love potatoes. Trust me; I can’t survive a day without having at least a bite of potato. Not every vegetable you’ll find comes with such kind of versatility as a potato does.

Isn’t it a fantastic thing to have a tasty vegetable that suits almost every kind of recipe? For this excellent quality, the potato has become one of the most popular food ingredients worldwide.

Now, when it comes to cooking potato, boiling is one of the convenient and quickest ways. Now, my question is, do you know how to boil potatoes in the right way? Should a potato be peeled and cut before or after boiling? Let’s find it out in this article.

I am pretty much sure that you don’t want your potatoes to dry out. If you put them in the oven, chances are you’ll end up having dry potatoes. However, you can do it if your recipe demands dry potatoes. In a general sense, you must boil them properly when it comes to making potato salad or mash potatoes.

When potatoes are boiled, they can be easily used as a side dish as well. On top of that, when you boil them, they are adequately cooked, and the cooking time is also convenient. Now, if you are wondering how long does it take to boil potatoes? Surprisingly, it only takes 10 to 20 minutes to boil potatoes.

Which Potatoes to Boil?

There are different kinds of potatoes. While there are starchy and waxy potatoes, you’ll also find sweet potatoes. There are also all-purpose potatoes, which can be used in almost every kind of recipe.

Now, the question is, which potatoes to boil? Generally, when you need to boil potatoes, try to choose from waxy or all-purpose types because they are useful in holding their shape while being cooked. After the completion of cooking, you’ll have a unique creamy texture from them.

Besides, as they are not so significant and have thin skins, they will take a minimal amount of time cooking. Now, you can also have a try on starchy potatoes like Russets. I hope they will be useful for making mashed potatoes.

However, make sure that you are boiling them whole instead of cutting into chunks because they usually fall apart while being boiled.

Should a Potato Be Peeled and Cut Before or After Boiling?

From my point of view, the difference is quite negligible. However, you’ll get several viewpoints, several persons. It depends on your preference. In a general sense, potatoes that are nicely peeled and diced will take less time to boil. Therefore, when you’re in a hurry and don’t have much cooking time in your hand, you can quickly peel it up.

On the other hand, according to experts from the Idaho Potato Commission, you should not peel out the potato’s skin while boiling. Otherwise, you will end up losing some vital nutrients of potatoes during the cooking process. So, boil potatoes with skin so that you will get 100% nutrients.

Besides, by doing so, you’ll get some extra flavor from the potato. However, if you don’t like to eat potato skins, you can always peel them off right after they’re boiled. But first, you must cool the potatoes properly.

If you cut the potatoes in chunks, the cooking will be even faster. If you are still unsure how to boil potatoes, below, I will show you the step of the way by step so that you can boil potatoes quickly without any hassle.

How to Boil Potatoes Quickly

When it comes to boiling potatoes, you must keep in mind that they soak up the most flavor. So, if you want to get the maximum taste, you should salt the water before cooking them. To add extra flavor, you can add other ingredients like parsley, rosemary, different seasonings, or spices to the pot.

Some people try to boil potatoes in chicken broth or with vegetables to increase the overall flavor. There is no doubt that people love the boiled potatoes recipe. Now, find the step by step guide below about boiling potatoes in a pan or pot.

First of all, you must clean the potatoes properly. You can use a vegetable scrub brush to clean them thoroughly.

My guideline is, you should cut all of the potatoes into chunks. But, the chunks should not be larger; try to keep them smaller because smaller chunks of potato take less time to boil.

Now, it’s time to take all of the potatoes in a pot. Add enough water and cover them completely. You can add salt, broth, or other seasonings to the pot as per your preference.

Boil them properly. When the water will start to boil, reduce the heat of your stove. Properly simmer them for at least 15 to 20 minutes or until the potatoes become tender. Then you need to drain them immediately to complete the process. 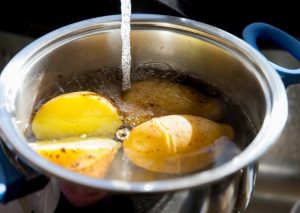 How to Store Boiled Potatoes

Suppose you have successfully boiled some potatoes, but can’t use up all of the potatoes right away. So, the next important thing is to know how to store boiled potatoes. There are quite a few options available for you to help you out in this case.

If you intend to use the potatoes right away, but you have other dishes, you should drain them up right after cooking. Keep the lid on so that the potatoes remain warm. Knowing how to keep boiled potatoes warm will help you to store them properly.

If you have a plan to use them on the same day when you boiled, the best decision will be to leave the potatoes along with the water in the pot. After cooling up, you should put the entire pot with the water and potatoes in the freeze. You can use them when you are ready.

However, keep in mind that it’s a temporary storage solution. When it comes to storing boiled potatoes for a longer time, you should store them in a container and keep it in the freezer. Make sure that the container is appropriately airtight. You can store them in the freezer for a few days in this way.

There is no denying the fact that potato is one of our all-time favorite foods. I love this versatile vegetable for its simplicity when it comes to cooking it. Besides, I can’t resist myself from having this yummy vegetable regardless of the form and recipe.

Boiling is a simple method to cook potatoes. People also got confused with some ordinary things. For instance, many of us didn’t know how to boil potatoes. Another confusion arises with this question should a potato be peeled or cut before or after boiling. In this article, I hope I have cleared everything so that you can remove all of your confusion with potatoes.

Hello there! I am Jean here, a person with a secret relationship with food. I would like to name this relationship 'The Ultimate Foodie'. At an early age, I used to be a foodaholic. I always have loved to explore the world of taste and deliciousness. Later, that love became my passion when I became a member of the 'YC' family. Now, I love to try new recipes and share them with my friends. In my leisure, I research different food ingredients. You are happily welcome here in 'Yummy Chilis'.

2 thoughts on “How To Boil Potatoes- Should A Potato Be Peeled And Cut Before Or After Boiling?”

"As an Amazon Associate I earn from qualifying purchases."